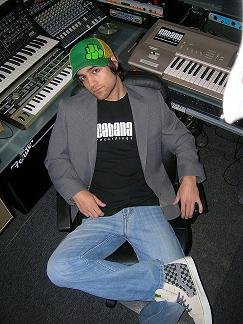 With the use of soulful style and a raw jazz feel, Justin Imperiale has created a distinct sound that manages to infuse life to those who have experienced his music. Justin Imperiale began his music career as a drummer. His passion for beats, rhythm and music eventually led him in front of a turntable in 1995 and since then, he found himself never looking back. In 2003, he began building his own recording studio as an outlet to start creating his own music.

His natural skill as a DJ and his uncanny ability to create as a producer progressed to great heights and moved him towards creating his own record label, Cabana Recordings. Started in February 2005, Cabana Recordings have been instrumental in allowing Justin Imperiale to be able to reach out and share true life, funk, and soul through his music. Starting off with the release of the “Cabana WMC Sampler” for the 2005 Winter Music Conference in South Beach, Cabana Recordings made a name for itself with the house music aficionados. Original remix work in 2005 with Abicah Soul and Da Monkey Nutz built the momentum for the release of Justin Imperiale’s debut record,“Deeper Than” EP under his own label Cabana Recordings in 2006. This release set Cabana’s sound and good energy firmly in place, with its desire to explore influences that range anywhere from natural organic sounds to combining latin/ jazz and soul-infused aspects of house music.

Justin Imperiale’s strong second release “Piano Daze” featuring Jay Sebag (with remixes by Abicah Soul & Dom Navarra) in 2007 has quickly made noise internationally in such short time. This musically sophisticated piano track generated such great international interest it propelled Imperiale to create his debut album, “Stereophonic”, which was signed and exclusively released in Japan by the record label, ToysFactory, the same label who released internationally recognized names such as The Yeah, Yeah, Yeahs, Green Day, and even some of Imperiale’s favorite artists such as The Avalanches and Kenny Dope.

The recent attention has also led to the licensing and inclusion of Imperiale’s tracks in excellent house compilations released by ClubStar in Germany (“Deep House 4th Chapter”) and Concept Music/SuSu in UK (“SuSu-The Other Side of Midnight”), with Imperiale’s name appearing alongside his inspirations like Kenny Dope, Louie Vega, Kerry Chandler and Jovonn, to name a few. Now officially an international artist, Justin Imperiale’s music can be heard worldwide, allowing the house music community to mark this artist/dj/producer as one to definitely watch.

In the United States, Justin’s music has been recently featured on New York City’s Premier Jazz Radio Station CD101.9, “The Groove Boutique” with Rafe Gomez. Justin Imperiale is based in New Jersey. However, his quest to share his music takes him beyond his home as he is known to move crowds at guest spots and Cabana parties all over NJ, NY, Miami and Chicago. Not one to rest on his laurels, Justin Imperiale is already hard at work with continuing to forward Cabana Recordings closer to its vision of having multi-talented artists produce music as well as have musicians bring the Cabana music to life by playing live music that is inspired by different musical influences that knows of no cultural boundaries.

With this spectacular vision in mind for himself and for his label, one can expect much from Justin Imperiale in the near future as he continues to persevere and achieve greatly beyond the limits of his musicianship and creativity.